Automatic milking is the milking of dairy animals, especially of dairy cattle, without human labour. Automatic milking systems (AMS), also called voluntary milking systems (VMS), were developed in the late 20th century. They have been commercially available since the early 1990s. The core of such systems that allows complete automation of the milking process is a type of agricultural robot. Automated milking is therefore also called robotic milking.[1] Common systems rely on the use of computers and special herd management software. 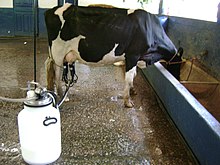 The milking process is the collection of tasks specifically devoted to extracting milk from an animal (rather than the broader field of dairy animal husbandry). This process may be broken down into several sub-tasks: collecting animals before milking, routing animals into the parlour, inspection and cleaning of teats, attachment of milking equipment to teats, and often massaging the back of the udder to relieve any held back milk, extraction of milk, removal of milking equipment, routing of animals out of the parlour.

Maintaining milk yield during the lactation period (approximately 300 days) requires consistent milking intervals, usually twice daily and with maximum time spacing between milkings. In fact all activities must be scheduled around the milking process on the dairy farm. Such a milking routine imposes restrictions on time management and personal life of an individual farmer, as the farmer is committed to milking in the early morning and in the evening for seven days a week regardless of personal health, family responsibilities or social schedule. This time restriction is exacerbated for lone farmers and farm families if extra labour cannot easily or economically be obtained, and is a factor in the decline in small-scale dairy farming. Techniques such as once-a-day milking and voluntary milking (see below) have been investigated to reduce these time constraints.

Automation progress in the 20th century

To alleviate the labour involved in milking, much of the milking process has been automated during the 20th century: many farmers use semi-automatic or automatic cow traffic control (powered gates, etc.), the milking machine (a basic form was developed in the late 19th century) has entirely automated milk extraction, and automatic cluster removal is available to remove milking equipment after milking. Automatic teat spraying systems are available, however there is some debate over the cleaning effectiveness of these.

The final manual labour tasks remaining in the milking process were cleaning and inspection of teats and attachment of milking equipment (milking cups) to teats. Automatic cleaning and attachment of milking cups is a complex task, requiring accurate detection of teat position and a dextrous mechanical manipulator. These tasks have been automated successfully in the voluntary milking system (VMS), or automatic milking system (AMS).

Since the 1970s, much research effort has been expended in investigating methods to alleviate time management constraints in conventional dairy farming, culminating in the development of the automated voluntary milking system. There is a video of the historical development of the milking robot at Silsoe Research Institute.

Voluntary milking allows the cow to decide her own milking time and interval, rather than being milked as part of a group at set milking times. AMS requires complete automation of the milking process as the cow may elect to be milked at any time during a 24-hour period.

The milking unit comprises a milking machine, a teat position sensor (usually a laser), a robotic arm for automatic teat-cup application and removal, and a gate system for controlling cow traffic. The cows may be permanently housed in a barn, and spend most of their time resting or feeding in the free-stall area. If cows are to be grazed as well, a selection gate is required to allow only those cows that have been milked to the outside pastures.

When the cow elects to enter the milking unit (due to highly palatable feed that she finds in the milking box), a cow ID sensor reads an identification tag (transponder) on the cow and passes the cow ID to the control system. If the cow has been milked too recently, the automatic gate system sends the cow out of the unit. If the cow may be milked, automatic teat cleaning, milking cup application, milking, and teatspraying takes place. As an incentive to attend the milking unit, concentrated feedstuffs needs to be fed to the cow in the milking unit.

The barn may be arranged such that access to the main feeding area can only be obtained by passing the milking unit. This layout is referred to as forced cow traffic. Alternatively, the barn may be set up such that the cow always has access to feed, water, and a comfortable place to lie down, and is only motivated to visit the milking system by the palatable feed available there. This is referred to as free cow traffic.

The innovative core of the AMS system is the robotic manipulator in the milking unit. This robotic arm automates the tasks of teat cleaning and milking attachment and removes the final elements of manual labour from the milking process. Careful design of the robot arm and associated sensors and controls allows robust unsupervised performance, such that the farmer is only required to attend the cows for condition inspection and when a cow has not attended for milking.[2]

Typical capacity for an AMS is 50–70 cows per milking unit. AMS usually achieve milking frequencies between 2 and 3 times per day, so a single milking unit handling 60 cows and milking each cow 3 times per day has a capacity of 7.5 cows per hour. This low capacity is convenient for lower-cost design of the robot arm and associated control system, as a window of several minutes is available for each cow and high-speed operation is not required.

AMS units have been available commercially since the early 1990s, and have proved relatively successful in implementing the voluntary milking method. Many of the research and developments have taken place in the Netherlands. The most farms with AMS are located in the Netherlands, and Denmark.

A new variation on the theme of robotic milking includes a similar robotic arm system, but coupled with a rotary platform, improving the number of cows that can be handled per robot arm.[3]

Pros and Cons before purchasing a Milking Machine in Kenya

Pros and Cons before purchasing a Milking Machine ...
View All

This is what Kenyans have been looking for, a site dedicated only to dairy farmers. would ...
Dairy King-Kenya